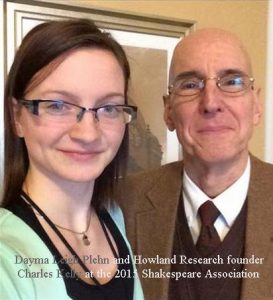 Dayna Leigh Plehn is a student at the University of Michigan, and in her fifth year as a research assistant at Howland Research. She is co-editor and co-designer of the 2014 Independent Publishers ‘Outstanding Book of the Year,’ The Brief Reign and Death of King Claudius, a play within the test of Shakespeare’s HAMLET.

In a 2014 video recorded interview with Howland’s founder Charles Kelly she said, “We usually refer to ourselves as toolmakers.” Below is a recap of some of her Shakespeare textual research “tool making” activities.

In December of 2012, Sir Michael Boyd, Artistic Director of the Royal Shakespeare Company at the time, wrote a lengthy note of encouragement to Dayna in response to her letter describing a grid exhibiting the 4000-line full text of Hamlet as 150 “plot elements,” a more useful division than 20 scenes for the purpose of blocking out stage scripts of 2500-3000 lines. The resulting grid-tool identified major characters and themes involved in each of the 150 plot elements.

The Brief Reign and Death of King Claudius, a play within the text of Shakespeare’s HAMLET

To test the grid, Dayna identified plot elements in which Claudius speaks, those involving his accumulating guilt, and those involving his contention with Prince Hamlet and “extracted” the 1600-line Claudius narrative from the full text. She and Howland’s founder selected another 150 of Shakespeare’s lines to supply continuity, resulting in The Brief Reign and Death of King Claudius, a play within the text of Shakespeare’s HAMLET. From among 5600 books entered in the Independent Publishers awards for 2014, the Brief Reign was one of nine designated as “Outstanding Book of the Year.” Subsequently, Professor Gillian Eaton of the University of Michigan Theater Department requested Dayna to “extract” the narratives of Horatio, Gertrude, and Ophelia from the full 4000-line text, so that students in her Theater 399 class could study Prince Hamlet from the perspectives of Hamlet’s trusted friend, his mother, and his love. These are scheduled for publication as Character Narratives from the text of Shakespeare’s HAMLET.

Hamlet is a play that has come down to us in the form of three variant texts, two of which are conflated to form most modern editions. These are the 2nd Quarto (Q2) of 1604/5 and the Folio text of 1623. These two texts have close to 300 words that are variant in lines that are otherwise identical. More significantly, editors of respected editions do not agree on 158 of these words, and their Q2 choices range from less than 10% (Oxford) to almost 90% (Riverside). To support development of the character narratives, Dayna analyzed all 158 variant words, a process too lengthy to describe in this brief professional bio. It should be noted, however, that the effort produced the Howland Research Text of Hamlet which will also be published in a fine edition as the Triple Anvil Press HAMLET with the art work of Washington, D. C. artist Rose Jaffe.