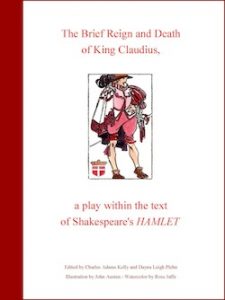 Scholars, at least as early as Henry N. Hudson in 1879, have noted that within the tragedy of Hamlet are the tragic dramas of Ophelia, Queen Gertrude, Laertes, and King Claudius. Each principal character has an individual perspective and a unique personal struggle. The narrative of Claudius is particularly rich. Having obtained his coveted crown and Queen, he is attempting to steer a peaceful course through the consequences of his acts of murder and usurpation, not to mention the threat of an invading army from neighboring Norway

The full text approaches 4000 lines, which would take approximately four hours to perform at a rate of 1000 lines per hour. With few exceptions, the length of Hamlet on stage has been between 2500 and 3000 lines. The director, or anyone concerned with presenting the play in performance, must make many decisions about which lines to cut and yet produce a coherent script. Recognizing the inherent awkwardness of a 4000-line text, the editors designed and compiled The HAMLET Plot Element Grid for Stage Script Development and Analysis to reduce that inefficiency for directors and others concerned with preparing scripts.

Text Planning and Analysis Tools included as Appendix to this Edition

A reduced copy of the 35” high Grid can be found in the appendix to this edition. In the Grid, the 4000-line text is rendered manageable by being divided into 150 plot elements, each described concisely. A plot element might be as few as three lines, such as the Queen drinking from the poisoned cup, or as many as 95 lines, such as Hamlet deftly coaxing Rosencrantz and Guildenstern to reveal that they were sent for by the King. In the Plot Element Grid, there are columns for the principal characters, and additional columns identifying the major themes and relationships that might be addressed in certain plot elements. Marks have been entered in the cells formed by theGrid to indicate speakers and themes involved in each plot element.

The text of The Brief Reign and Death of King Claudius

Having completed the Grid, with encouragement and advice from several recognized theater people and Shakespeare scholars, the developers were keen to test the Grid in practical use. The editors decided to determine how efficiently the text of a Claudius play could be developed. Using the Grid, plot elements of three kinds were identified: plot elements in which Claudius speaks, those involving evidence of his guilt, and those involving his contention with Prince Hamlet, which are categories of text identified by columns on the Grid. The next step was to read the core script and supply additional passages from the full text to establish continuity, where necessary. The resulting text is 1750 lines, about the length of Shakespeare’s Comedy of Errors.

The Brief Reign and Death of King Claudius is available for purchase from the Howland Research Shop in two distinct binding formats: